During surgery, cutting of the tissues and nerve fibers causes an intense burst of nociceptive pain. Local anesthetics are effective for pain management after surgery. However, most local anesthetics–including extended-release formulations–struggle to work beyond 12 to 24 hours, while severe postoperative pain often lasts through the first 72 hours. These limitations of local anesthetics have contributed to the extensive use of opioids in the postsurgical setting that caused a cascade of negative consequences, ranging from potentially severe adverse events to the risk of long-term use, misuse, and addiction.

Our new product candidate that pairs PLEX matrix with a widely-used local anesthetic (bupivacaine) to reduce post-operative pain have completed pre-clinical development. In our preclinical studies, we have observed compelling results with periods of reduced pain that are longer than those provided by the standard of care as well as with other approved long-acting local analgesics. In a state-of-the-art post-operative pig model (Von Frey Model), PLEXpain applied locally as a paste into the surgical site (on top of the sutured muscle) demonstrated significant pain reduction for >4 days, significantly longer than other long-acting local analgesics. 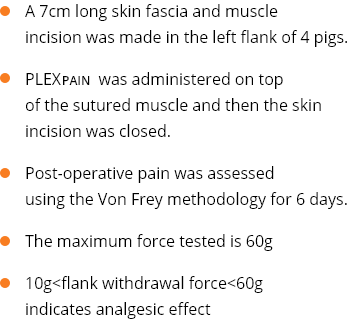